I’m referring to Phong Nha Park which is 30 miles from Dong Hoi, Vietnam.

I rode around the park for four hours, and it didn’t cost me even one cent in fees, because I never stopped to pay for an “attraction.” The road and the scenery was attractive enough. These place that charge admission are mostly caves, and at the age of 67, I’m not interested in touring any more caves. Nor did I want to go to a kiddie water park. There are few places to eat in this enormous park, and when I saw a restaurant at the water park I pulled over, where I was promptly charged fifty cents U.S. by a sad man who seemed apologetic about his job. Fortunately, I had recently found some Vietnamese bills by the side of the road. These added up to fifty cents. They don’t use coins in Vietnam, and their money was at first confusing to this foreigner. 100,000 dong roughly equals five dollars.

But the restaurant I inquired at evidenced the most outlandish price gouging I’d ever seen. Chicken and rice, 300,000 dong. That’s five times what it would cost in a normal restaurant. There were few patrons even at lunch hour, and I can see why. All I had to do was drive a few more minutes and I found a family restaurant by the side of the road where the proprietress called out to me. Mom, Dad, and all the kids in were in attendance. I had a delicious meal for two dollars, and that included a coke. The kids found me quite interesting and stared at me while I ate. Then they forgot about me. I took their picture.

The park was even more impressive than all the hype I’d read about it online. The caves are supposed to be amazing too, but I’m more into the Tarzan/Lost World thing. If Vietnam wants to get into the movie business, they should promote this place for Jurassic Park V. But if they want to curry favor with foreigners, they should watch the price gouging thing. There were no other Americans to be seen. French, Germans, British, but no Americans. Maybe the Europeans expect to spend more on vacation.

The next day I decided to walk around until I had to take a cab to the airport. It was pretty warm and sunny, and got more so as the morning morphed into afternoon. I got over-tired, because when I’m home in Chiang Mai I’m either on a motor scooter or a bicycle. I forgot how hard walking is.

After an hour I realized I was lost yet again, but because I’m sometimes good at reckoning my position, I took an audacious shortcut through a neighborhood that looked a lot of Potrero Hill in San Francisco. When it was foggy in the Haight and Sunset, it could be sunny in the Mission and Potrero Hill. And this was not in the least bit yuppified, which is how I remember a lot of San Francisco from forty years ago. 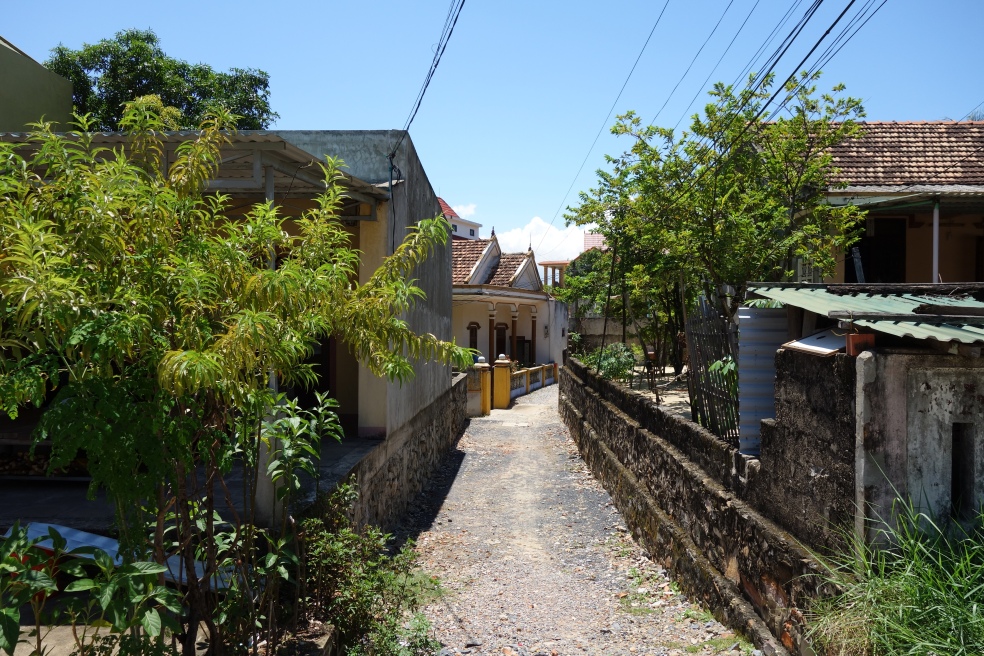 At the airport they had trouble finding my visa for Thailand. They assigned a polite man to come talk to me and ask me questions. How long had I been living in Thailand? Did I work there? I thought it odd that the Vietnamese would show such concern for Thai Immigration. Then he asked me to find my current visa. After half a minute I did and showed it to him. “Ah, so there it is.” Looking back on it, I think he just wanted to practice his English.

I was impressed by the courtesy and dignity of every man I met there. Dong Hoi is pleasant enough, not crowded or crazy, and with a fresh breeze from the ocean. That counts for a lot. A lot of Southeast Asia suffers from air pollution.

Dong Hoi, Vietnam also reminds me a lot of Encarnacion, Paraguay, where I lived for six months. Unlike Dong Hoi, it hadn’t been bombed to rubble by the Americans forty-five years ago. It had simple languished under a stupefying dictatorship. But both places will probably become touristic hotbeds in the future.

One thought on “Phong Nha Park”