This has got to be The Weirdest Thing That’s Happened To Me In Years.

A few days ago I was driving around Northern Thailand on my motor scooter. For two months now there’s been little reason to do so, as the heat, smoke and drought have conspired to make this beautiful place ugly. Then a few rains came, the air was washed clean and a green fuzz has miraculously covered the ugly black and brown of burnt vegetation.  So I decided to visit my favorite place about a half an hour north of here, on the way to Srilanna National Park. It’s a valley that looks like the Napa or Sonoma valleys near San Francisco.

As I was driving through a little town I noticed a flame tree in bloom, and stopped to photograph it. There was sign near the tree, on which was printed one of the few Thai words I recognize, “Massage”  Price: 108 baht. I decided to investigate.  Only a few yards away I found the place advertised, but it was a little temple, and instead of Buddhist images, it held Hindu statues, featuring lots of disembodied heads. Everything was unusually dirty and chaotic. I asked if I could take pictures. The lady in charge said yes, so I pulled in with my motorcycle, parking next to a big tree.

When I got off the bike, a a hundred red ants immediately swarmed over my feet, up my legs and into the clothes. These were large ants; the kind that bite.

So now I’m jumping around, swearing, trying to shake these ants off my feet and swat them out of my clothes. The three ladies there found this mildly amusing, but not surprising. Then the one who seemed to be in charge asked it I would be interested in massage. I checked my wallet and all I had was one hundred and ten baht (about $3.30).   OK, I said.

The little temple was full of stuff, large pieces of furniture, maybe some appliances. I badly wanted to photograph the creepy heads they had scattered along every available surface, but my camera was still in the motorcycle, and not wanting to risk the biting ants, I waited while they moved furniture around to some purpose I couldn’t understand. The eldest lady brought me a glass of water. A younger woman, maybe in her twenties, who looked as though she might be mentally handicapped seemed to be my masseuse and after about ten minutes she lay down a bamboo mat on the only level ground that wasn’t crawling with ants and then tossed on it a dirty child’s plush toy that I surmised was to be my pillow. By now she had donned a turban about the size and shape of a waste paper basket. She motioned for me to lie down.

The thought occurred  that this might be my last chance to run away.

I lay on my back, putting my head on the plush toy and trying not to think about the ants. Then she pulled out a large knife about the size of a Bowie knife. She asked me what parts of me hurt, and I told her my knees, which then prompted her to lay the knife on parts of my legs and while making limp massage motions with the other hand she began to loudly and repeatedly burp. These burps were deep and sounded surprisingly like a man talking.

This went on for about twenty minutes. She also began to sniffle from a runny nose, and sometimes would blow her nose in her hand and then fling the snot away, returning to massage my leg with that same hand. Every time I considered getting up and running away I remembered the ants. After about half an hour the boss-lady (her mother?) yelled something and that was it. The girl stopped burping. I handed her my hundred baht note, but could no longer find the ten baht coin. Perhaps it had fallen onto the ground. The girl said “no problem” and waved me away.

The girl went to her mother and knelt at her feet while the mother put her hand on the turban as in a blessing. No one was paying attention to me, so I made a run for the motor scooter, only picking up a few ants along the way. I raced around the tree and up to the road. It took me a few minutes to realize I was headed the wrong way, back the way I came, and when I turned around I briefly debated stopping again to photograph their weird temple, but decided against it. Besides, pictures wouldn’t help tell the story. It was one of those things you had to experience first-hand.

I taught for many years, mostly at the University level, but most recently I taught high school students in Paraguay. Since this was an English conversation class, I was attempting to get them to talk about anything, rather than to just listen to me talk at them. I asked them what they wanted to be when they grew up.

All of them said “famous.” Some wanted to be movie stars. I thought that odd, because in humble Paraguay we were far removed from Hollywood or any important cultural center.  When celebrity culture grew like a malignancy back in the eighties, I thought this would be temporary, but almost forty years later its spread to infect most of the organism. Maybe social media and smartphone use has something to do with it, but the desire to stand out from the crowd by becoming famous is now thought of as admirable. It’s a legitimate goal for anyone who can afford to take the plunge.

Wanting to be famous is the desire to be loved by strangers. Based on the values we ostensibly hold and attempt to teach our children, this seems an odd goal to set for oneself.

In Paraguay, almost no one I met had ever been anywhere else. The super-rich visited Disneyworld in Orlando, Florida, and then went shopping in fancy malls. Often fifteen-year old girls would go in a group, chaperoned by a rich aunt. I suppose it’s normal for teenagers to be impressed by celebrities, and to want to be more like them, but it seems from the perspective of this retired American as if the whole world has become a shallow teenager.

When I taught in Thailand, I was teaching classes in performance for broadcasting at the University level. The students there all hoped to become celebrities. Thailand doesn’t have much a movie industry, but they crank out lots of daytime dramas to air on television. Nobody pays them much mind. They don’t want to be Thai TV stars, they want to be International movie stars.

Even though their English language abilities were often minimal, many of my students were very cute. In Thailand, boys and girls both aspire to the same level of cuteness. Even though Hello Kitty was invented in Japan, it seems to have found a permanent home in Thailand, where cuteness at all costs is the national motto.

Cute and sexy aren’t the same thing. In fact, they’re almost opposites. If your path to being famous depends on being super-cute or super-sexy, you’re in trouble, because there are more people on that road than it can handle. Time is of the essence, and it’s always running out. Better get there at just the right time and don’t dawdle!

Maybe someday young people all over the world will snap out of it and decide that their goal is to be kind, to develop charity in whatever situation they find themselves, to learn diligence and patience, but most of all to see service towards others as a lofty goal all in itself. Screw being famous.

Maybe they will realize that the desire to be loved by strangers is an artifact of a sick culture based on voyeurism. 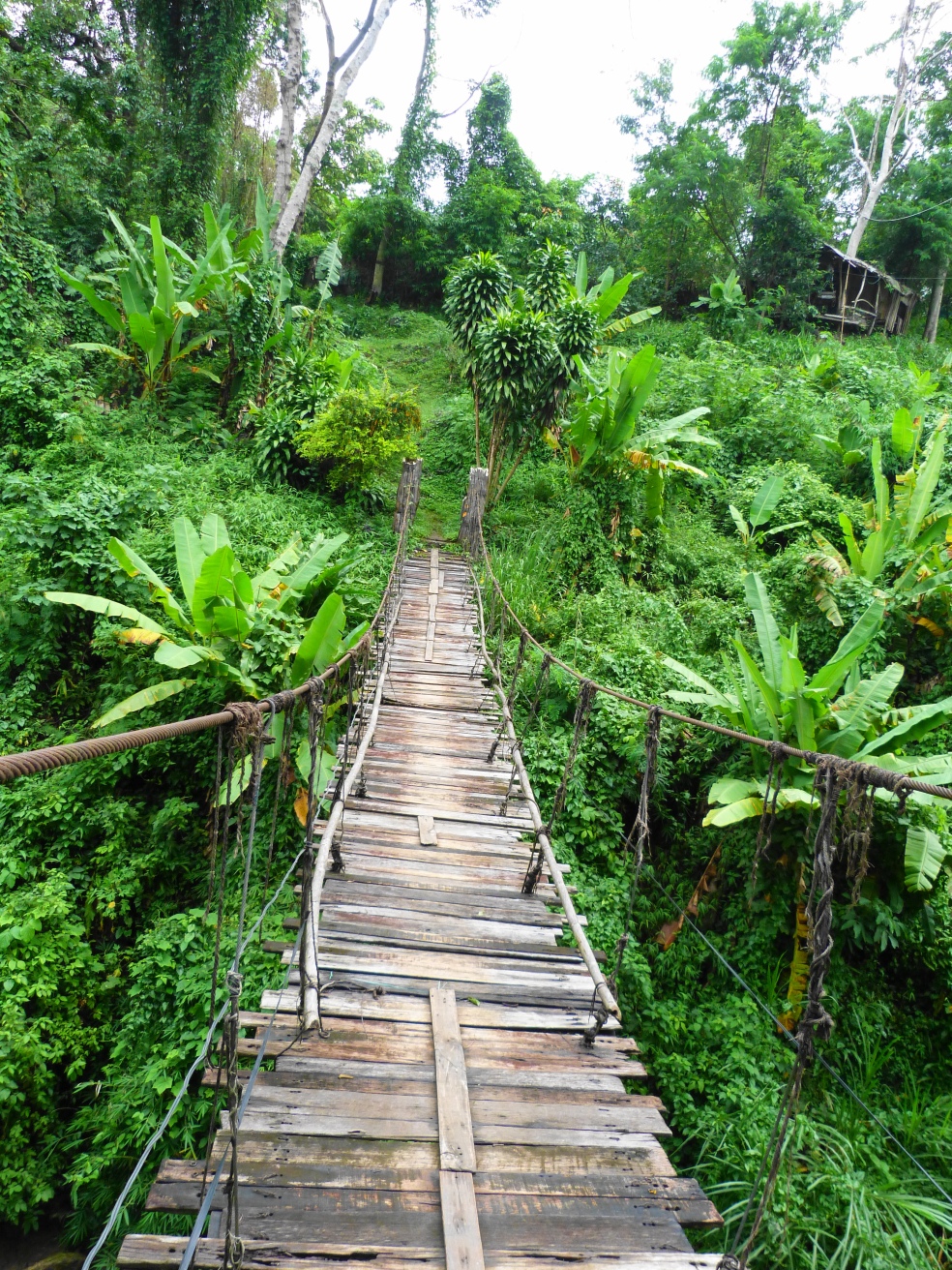 It’s too hot to go outside.  This is not a rare occurrence, for it’s been this way for a couple of months now. And the drought has made everything so ugly that there’s no reason to sight see. I’m stuck indoors in our one air-conditioned room, staring at my laptop. Usually this means that I’m browsing Facebook or YouTube in a hypnotized fashion, but now I’ve snapped out of it. I want to do something constructive.

Back as a graduate student in Iowa, when I wrote plays at the rate of one a week, I was at my most productive when the weather was at its worst. With few options, I was trapped in my room in front of my trusty Underwood. There was no internet back then. I didn’t even have a telephone. Had no credit card, ATM’s hadn’t been invented yet…how did I survive?

It’s easy to become bound to the circumstances of living and forget my main objectives. I start making excuses and blaming things outside myself for what I’m doing or failing to accomplish. Not this time. Not anymore.

I’m running out of time. Got to do what I’ve got to do now. There may not be many tomorrows.