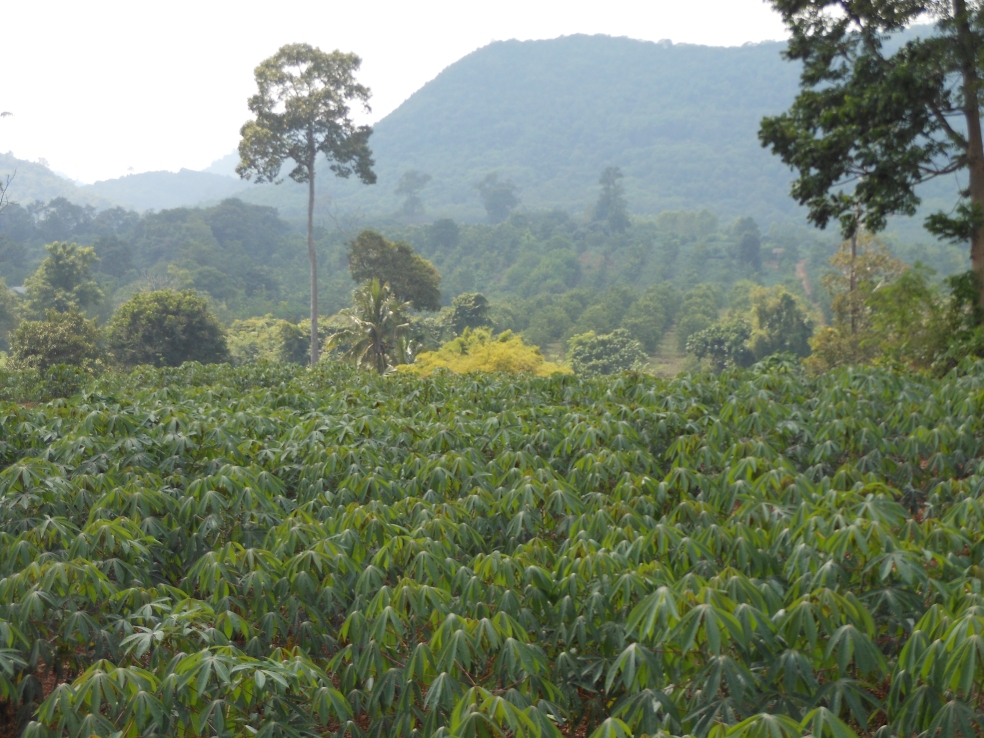 Wipa woke up yesterday morning complaining that she missed her mother. Because I am completely retired from work and have few obligations, we were able to decide to visit Mom and leave that very day, so I bought three train tickets, one for me, one for Wipa, and one for the motor scooter. We took the afternoon train from Chiang Mai to Lopburi, gateway to Isaan, and then rode the scooter to Wichian Buri, where her mother lives.

This is her home town, so I trusted her when she said she knew how to get around, and didn’t bother to consult a map beforehand. We arrived at four a.m., after spending the night in sleeping berths on the train, which were freezing cold, as has been my experience with Thai trains in the past. So I hadn’t slept well, and I became increasingly grumpy as the trip which had been promised to take one hour stretched to four.

As we drove on in the dark, and then into the dawn, it became increasingly apparent that she had no idea where things stood in relation to one another, what were the distances involved, how to estimate travel time, and that’s why she asked everyone she met along the way for directions.The girl selling flowers on the street, the man cutting weeds along the highway, various sellers at small town markets, all offered opinions, many of which were contradictory.

So Wipa and I had our first tiff, which wasn’t much of a fight, because not speaking one another’s language we can’t really argue effectively. I can’t really fault her for not knowing her way around, as her late husband took care of all that before he suddenly and unexpectedly died almost two years ago. She had never in their twenty-five years together been forced to navigate.

But we finally made it to her mother’s house and I took a profound nap, lying on a wooden pallet that served as a bed. I don’t think her mother likes me much, but I don’t care. Mom is a year older than me, and the only thing we had to talk about when we first met was in comparing our blood pressure and cholesterol medicines. Mom also chews “maak” which I think we call “betel nut.” A lot of older women chew it here. I makes you spit out a deep red juice and turns your teeth black, but if you’re no longer worried about the opposite sex finding your attractive, maybe the buzz or high is worth it.It seemed to make her mother act a bit intoxicated, and she talked on and on about lucky lottery numbers she intended to purchase.

The floor in Mom’s house in rough concrete, so all sitting and eating is done on a raised wooden platform. There are no chairs or tables. The bathroom consists of a squat toilet with a large ceramic jar in front of it which you can grab onto to prevent you from falling backwards as you squat over the opening. I learned this the hard way. The jar is stable because it’s full of water, which you use in lieu of toilet paper, applying it with the fingers of your left hand, which you later wash with soap and water.

All of it seems very strange to this Westerner, and big stoneware jars, some the size of a small elephant are all over the place. The concept of water on demand seems fairly recent. Speaking of elephants, a nephew, seventeen years old and clever, has the nickname “Baby Elephant” which he responds to without shame. It seems that most Thais have at least one nickname, and we know a young woman who has legally changed her name four times already, in search of good luck.

Isaan is Thailand’s Iowa and Nebraska. But it’s Iowa before World War II, and the soil isn’t nearly as good. Half the vehicles on the roads are agricultural machines, the most unusual to my eyes being a tractor/truck with the engine mounted over the front wheels and then long handlebars leading back to a driver on the vehicle behind, usually a platform big enough to hold five or six more people. These are called “lo thai noi.” For casual transportation, people use motorbikes. Standard displacement is 110cc, and some of them look like they’ve slogged up and down many a dusty road. I’ve even seen large families walking what appear to be long distances. In general, the populace seems happy and well-fed, though perhaps too busy working to brood about what they don’t have.

We are in Phetchabun, a part of Isaan that is not flat, but rather peppered with tiny mountain ranges. Some of these are quite high, but they are not long, extending only a few miles. It lends a Dr. Seuss effect to the landscape, and I’ve never seen any place quite like it. There are huge rocks lying about in the fields, but they are not black, as they were in Nicaragua, which makes me think their origin in not volcanic. In fact everything lithic seems dusty beige or dusty rose.

We went to the market, where a woman my age who recognized Wipa greeted her and, after noticing me asked in Thai, “does he have money?” She obviously assumed that I didn’t speak Thai, but I could tell that Wipa knew I understood her question and was embarrassed by it, later commenting that Isaan women gossiped a lot.

The women in the market all knew who she was and all noticed me. Even though we couldn’t hear what they were saying, we knew they were talking about her first public appearance with the aging foreigner.

Even more chaotic and dirty than most I’ve seen, the market teemed with tubs of frogs, eels, snakes and unhappy fish writhing in their last moments on the planet.

There is a crematorium right next to the market, its tall chimney disgorging the ashes of human remains within a few yards of the ramshackle stalls that sell food. Again, I found this strange, but no one else seemed to. We bought some fruit and snacks and went to the nicest park in town to eat them. It wasn’t a very nice park, as parks go, and as with most of the best places in Thailand, was some sort of Royal this or that, with signs thanking His Highness for his generosity, and shrines to his lineage, the Rooster King, while thousands of painted ceramic statues of roosters abound here and there, placed just where you might want to sit in the shade and have a picnic.

Wipa owns a house nearby, for which she receives a considerable rent, because it’s well-situated on the main road, near the aforementioned park. It’s an old-fashioned teak house, which someone has painted burnt orange. She seems to think that an improvement.

We left town today to drive two hours to her sister’s house. On the way we were going to stop in a mountain village to visit a cousin, Go-Go, a minute ladyboy who speaks some English, for he worked for a time as a bellhop in Pattaya, Thailand’s Sodom and Gomorrah-By-The-Sea.

At the market we bought snacks to bring to Go-Go, because he has very little to eat, but a change of plans resulted in us delaying our visit with him until tomorrow. I fully expect this visit to be full of the kind of adventure that has characterized my time in this country so far.

The sister’s family is a happy one. Their house is large and bright, with a huge linoleum floor on which they sit for meals. They have a large screen TV and a satellite dish and the TV is always on. Most Thai TV shows sound to me like cartoons, because the sound tracks have been augmented with canned laughter, beeps, boings, twangs and whoopee noises.

They’re farmers and I get the impression that they work from dawn to dusk. They own their own tractor and farm about forty acres, which here is a lot, for most labor is manual. Every day before cooking dinner the wife must pay the field workers their daily wages, and retrieve any implements they may have used. Both harvest and planting are done by hiring large crews to stoop, yank and drag. The men I see are small and wiry. Here the sun is the enemy, and every inch of a worker’s skin is covered by cloth.

Here, dark skin implies low status. When I showered at their home, I noticed that every lotion and soap advertised itself as “Whitening.”

I’ve noticed that people here don’t say “good morning” to each other. They’re not big on saying “goodbye,” either. The standard greeting here is “where are you going?” which to my ears sounds kind of pushy and demanding. People we meet always comment on the fact that I speak some Thai. Apparently, no one has ever met a foreigner who did.

Food is awfully important. Someone is always cooking and women are in charge of that. Children are sent scurrying on errands, usually run to the corner store to buy something. There are little stores everywhere, and vendors come by selling any and everything.

Go Go’s house is apparently a shack, but his mother has a nice place, though crowded with young children and draped with drying laundry. I swear there’s not a clothes drying machine in all of Thailand. Most clothes washing is still done by hand.

They were very sweet and urged us to move there, for we could build a new house just down the street. Other foreigners had already moved there, for the scenery and relatively cool mountain climate. No one could give me specific information as to where these men were from, but they all had younger Thai wives. When I asked what they did all day, they replied, “sleep, eat, boom boom (sex), sleep, eat, boom boom.”

Then they laughed pleasantly.

On the dirt road to Go Go’s town, we passed a motorcycle carrying two people, the passenger of which was a ladyboy, a transvestite in full make-up. Again, I thought this odd, for it would be the equivalent of driving down a dirt road in the Arkansas Ozarks and seeing the same thing.

One thought on “Isaan, Thailand’s Iowa”