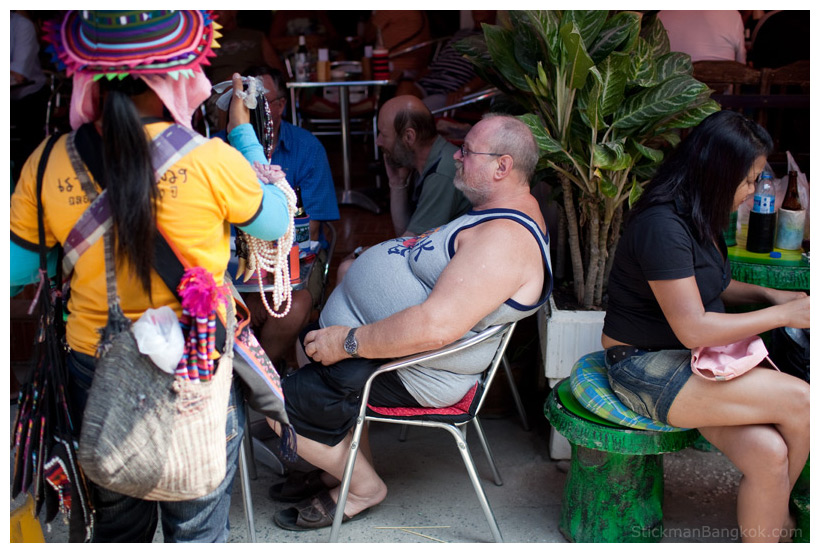 It used to take more get up and go to move across the planet, but ever since jet travel it’s been pretty painless.  Now there’s no major discincentive to discourage the indolent from finding their way to places where they can simply hang out the way teenagers hang out at the mall. Old guys don’t stare at their phones as often as teenagers do, but like their younger counterparts, the expression on their faces is usually a mask of boredom.

If you didn’t have any ambition where you came from, you’re not going to suddenly catch on fire in a new place. The challenge of learning a new language, of developing a hobby or mastering a musical instrument doesn’t appeal to everyone.  In fact, most people are content to watch paint dry as long as they’re not actively in distress.  If you classify girl-watching as a profession, then you’ll find a myriad of tropical countries where that could become a full-time job. The fact is, most of us get what we’re looking for.  If all you want is the absence of something you don’t want, then you’ll end up the proud owner of nothing much.

I know guys here who fill their days by watching sports from the United States on satellite TV. They have to set an alarm to see their favorite games, because they often air at four in the morning. I could see doing that every once in a while, but as a major time-filler it lacks depth.

I write, but as anyone who has followed the ups and downs of the publishing industry lately, that doesn’t mean anyone wants to publish or pay for my writing. Content is free, nowadays. If someone at a cocktail party asks me what I do, I can always say I’m a writer, but that lacks the cachet it once had. If my unfortunate cocktail party companion further inquired have I had anything published, I could nod gravely, without adding that it was thirty years ago. Yes, I once showed promise. So what am I working on now? Hmm, a memoir. The Life and Times of Yours Truly. Soon to be a major motion picture, starring Montgomery Clift as James Dean, and me as Hedda Hopper.

If anyone asks me what I’m doing in Southeast Asia, I can pretend to be a spy, or a professional do-gooder of some kind. I work for an NGO. You’ve never heard of it. We help rescue retirees with dementia from an uncertain fate. But no one asks. There are no cocktail parties. Just fat old men leering at Asian women.

And then there’s me, typing away on my laptop, thinking I’m special.