the author and Wipa, one of his two companions. The other is a guy named Sam. 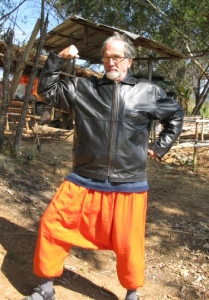 Oh my aching back. We went down what is without a doubt the worst road in Thailand. For three hours there were no signs of civilization, and in a country with 70 million people that’s only the size of California, that’s one deserted area. It’s up near the Myanmar (Burma) border, extremely mountainous, and those roads that exist look like they’ve been bombed into rubble. But my Honda PCX 150 did a fine job scaling the hills and braking on slopes.

I got to experience dropping the scooter on a slope filled with stones the size of grapefruit and deep dust. There was no way to remain upright for long. My shiny new scooter now wears some deep scratches, the scars of a campaign that was so fraught with terror I had a hard time enjoying the scenery.

And it was cold. This is Thailand. It’s never cold here, except when you’re up high and it’s the day before Christmas. Fog and mist and forty-five degrees Fahrenheit.

I will remember this trip, and remind myself that distances on the map are hard to determine. When they say the road is minimal, in some countries they really mean it.