We rode for about seven hours, and five of those involved being rained on. You get used to reduced visibility and steep slopes with slick pavement, but it’s dangerous coming around hairpin turns every hundred yards, especially facing trucks who don’t stay on their side of the road. When we first started to climb out of Samoeng, on the back road to Pai, I noticed there were great gobs of animal shit on the highway. I assumed it was horses. Then I noticed a smell like the zoo. I guess it was elephant shit, though I saw no elephants during the ride. Seems like maybe someone had brought elephants through here a few hours earlier, as the shit had already been smeared by passing tires. They use them here as we used tractors and trucks.

In Iowa you have to be careful of hitting deer, here it’s elephants and water buffalo. 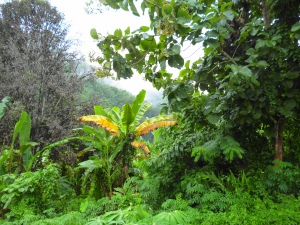 the author, pretending to be a doctor scanning an X ray

I just flew for one day from Chiang Mai to Bangkok, spending a day and then returning the next morning. For at least three hours of that day I was trapped in a taxi, in traffic. The distances are huge and the traffic is horrible.

But the photo shoot that I came down for went quickly and they seemed pleased. They were a Japanese crew, and no one really spoke English or Thai, so we communicated via sign language. The best park it, it only took one and a half hours and they paid me in cash when it was done. Plane fare included.

I posed as a doctor for some sort of advertisement, but no one ever explained to me what the product was. They had clipping from another advertisement or catalogue for me to look at, and there I saw another graying sixty-something in a lab coat, looking serious. So I imitated his expression.

The facility for the session was a five story building called CreatImage in an unlikely neighborhood, near the Prakhanon BTS. I had assumed it would be shot in Town In Town, the AV center of Bangkok. It was hard to find this place, and I asked an American-looking guy in an alley where it was. Turns out he lived across the street, but hadn’t heard of it either. He was, however, intrigued by my story of getting a gig as a model, so he gave me his card and asked me to call him if they needed any more “farang” models. He had long stringy hair and bad teeth and looked like a rock musician. Turned out he was, and from LA. I told him I had lived in San Francisco for many years. He said “I knew you were a Californian.”

His business card was for a financial group with offices in London, Paris, Hong Kong and Bangkok. He was apparently the CEO, and had the title “Dr. “ in front of his name.

A big thundercloud hovered about Doi Suthep, and a bolt of lightning struck with a resonating boom. But my friend and I head up into the hills anyway, and when we had climbed a thousand feet, the air was much cooler and fresher. The sun was struggling to make it through the clouds so the light was weird, it was like an eclipse was taking place, but it wasn’t. We rode along for two-thirds of the way up to the Hmong Village, and then some road construction had caused a massive mud wash over the road, red clay that was insanely slippery. His bike went down, breaking a mirror. I stopped and gingerly turned back. I got muddy, but both the bike and I remained uninjured. I’ve been down this same road five times now, and I never get tired of it. It’s a visual feast. 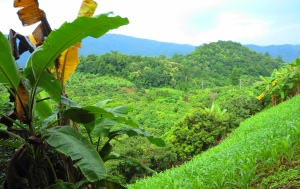 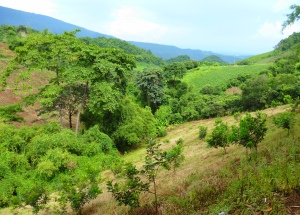 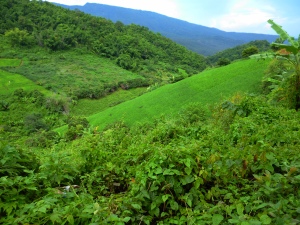 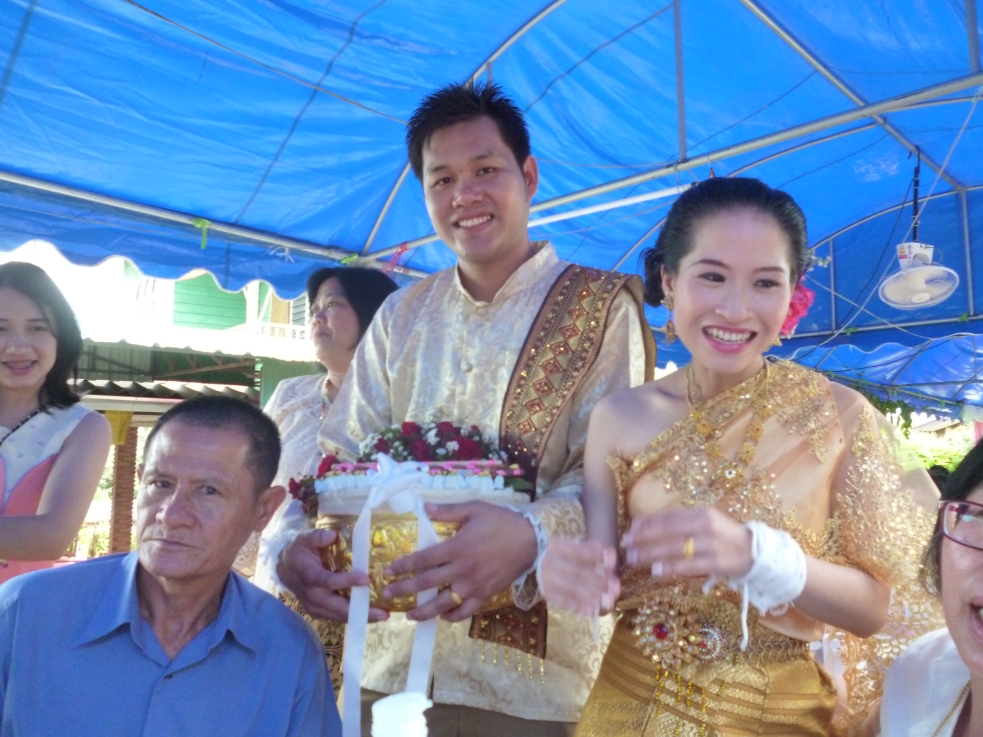 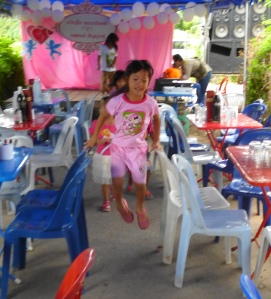 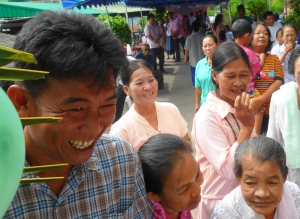 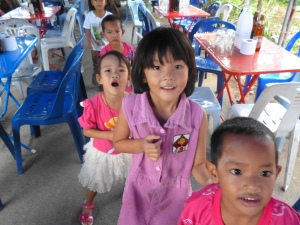 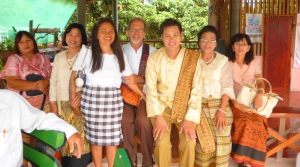 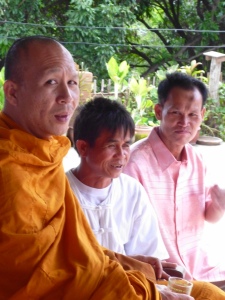 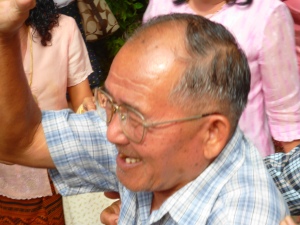 My friend Pen lives in the village of Wiang Hong Long, about an hour south of Chiang Mai. She was invited to a wedding in the village of Hot, and asked me if I wanted to go with her. I did, and I’m glad I went.

It wasn’t a large wedding, but everyone was primed to have a good time, and that they did. It started with a procession up the hill to the bride’s house. Many firecrackers were thrown. The actual wedding ceremony took place is a small room, and only a fraction of the guests were interested in trying to cram themselves into it. Beer and whiskey flowed outside, and many people were content with that.

They observed what must be a tradition where the bride’s family stopped the procession at their gates, holding a symbolic chain across the road until the groom’s family had paid a dowry. Everyone was laughing on both sides of the chain. This happened again at the entrance to the wedding room, where I guess the ante was upped.

I don’t have to speak fluent Thai to know what was going on most of the time. The other guests were nice to me, and I realized almost without exception I was one of a handful of elderly there. A woman across from me spoke some English and told me I looked like a famous American actor. I asked “which one?” She had to think about it. After about ten minutes she said “Sylvester Stallone.”

The celebration ended with karaoke, as all Asian ceremonies seem to. Traditional Thai romance songs were greeted with applause. All of those sound the same to me, like what I have always thought of as Chinese music. Warbly runs up and down an oriental scale. Women singing too high and shrilly for my taste.