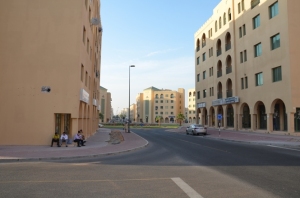 The sun is sinking low in the sky here in International City, a Dubai housing project so vast that just one of its many complexes holds tens of thousands of people.  I am presently staying in China, but I have stayed in Persia. There’s not much difference. Cheaply constructed buildings that will have to be torn down in forty years, meant in the beginning to attract a solid middle class, but now only a few years after construction, housing the working poor. Women are a distinct minority. Little restaurants and grocery stores that do tiny business, mostly at night.

Today is Friday, the universal day off here. Most people sleep late.. I’m going to set my camera up and take pictures in about half an hour, trying to catch the Fellini-esque quality of the place. Think of the opening scenes of Nights of Cabiria, the apartments buildings interspersed with dusty vacant lots. I keep expecting to see hunchbacks and dwarfs just out of my field of vision, and hear a soundtrack by Nino Rota.

Instead I hear the call to prayer, over the mosque Public Address system. The parking lot at Dragon Mart is filling rapidly with cars. On weekend nights, everyone here does some serious shopping. The rich go to Mall of the Emirates, the poor go to Dragon Mart.